Download Iceologer Mod for Minecraft PE: add new mobs that will bring variety to the game. 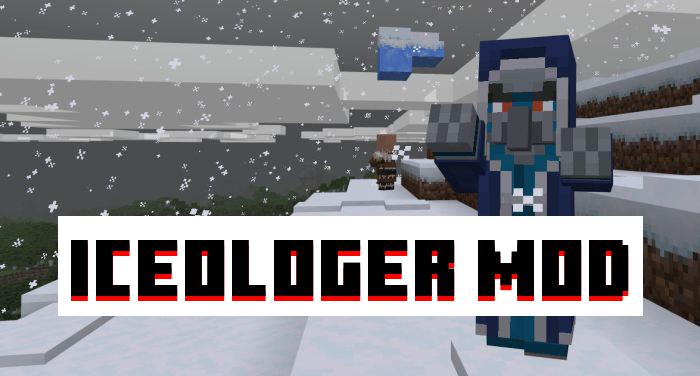 Developers from time to time add new mobs to Minecraft PE. There are exceptions when developers conduct voting. For example, they held a vote on Minecraft Live in 2020. According to the results, the Glow Squid Mob won.

Not everyone liked it because the other candidates looked decent. Therefore, authors of the Iceologer  Mod created the opportunity to add those who did not win the vote. Mobs have custom textures, animations, and sound effects.

The Iceologer Mod adds an icebreaker from Minecraft PE dungeons. This aggressive mob appears in snowy biomes at nightfall and attacks its victims by throwing ice blocks at them. If you manage to kill him, you will get several emeralds, blocks of ice, and snow.

The mob is strong enough, so don’t mess with him. His Health is 15 hearts or 30 units. In addition, it can spawn ice blocks over the head of enemies.

NOTE: If you rename the monster to Chillager, the skin will change.

Also with this mod, an ice staff is added to the game. This is a rare but powerful weapon that gives the player the abilities of an ice robber.

At Minecraft Live 2020, the developers allowed players to choose one of three mobs (Moobloom, Iceologer, and Glow Squid), one of which would get into the game with the next update.

The Glow Squid won. But the developers of the Iceologer Mod have added other creatures too. These are very interesting mobs with their features and nuances.

The Glow Squid won the vote. It has a unique texture, thanks to which the Squid will glow even in the dark. He will dwell in the dark depths of the reservoir. It differs from ordinary Squids only by the model.

A hostile mob in Iceologer Mod will spawn in Minecarft PE snowy biomes. He has a new attack system: he throws blocks of ice at unwanted people. Attacks all living creatures.

Moobloom is a new kind of cow. Peaceful and cute mob. Spawns in all biomes. It is possible to cut hair and get colors. The mob still gives milk