Download Origins Mod for Minecraft PE: discover interesting abilities that will help you move to a new level of the game. 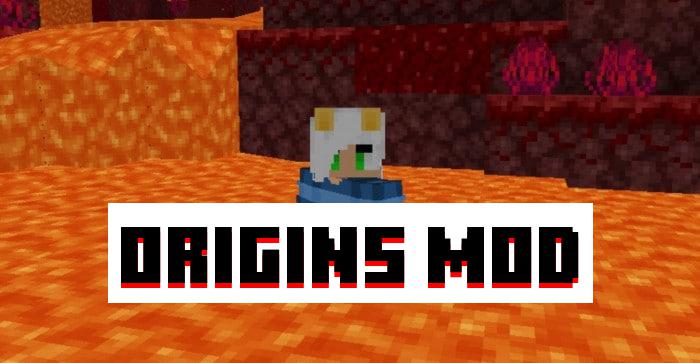 Would you like to be able to become invisible, not burn in lava, have the ability to fly, breathe underwater, and do other cool things? Origins Mod gives the player a lot of useful features and abilities in the Minecraft PE game world.

Now, before entering the new world, you will have to choose your “origin”. Depending on it, you will receive various bonuses and negative effects that will affect your entire future game.

The Minecraft Origins Mod addons present more than 10 unique races to the game, including an ordinary person. Each race has special abilities and vulnerabilities. Each element gives the hero certain advantages, but for balance, the author also included negative properties.

When launching a new Minecraft PE world with the Origins add-on activated, the player will be greeted with a dialog box with a selection and description of races.

NOTE: Right on the spawn, there will be a chest of the Nether with all the amplifiers. There is also a book with descriptions. You need to take any desired item and you can start survival.

There are very interesting races included in the Minecraft Origins Mod Bedrock:

How to install the Origins Mod in Minecraft?

Instructions on how to download the Origins Mod Minecraft are very simple. Just click on the link in the article below.

In the game settings, find the folder with the file and activate it pressing the necessary button.

After downloading all the necessary files, the game will start. In the “Mods” tab, the user can confirm the successful installation of the Origins Mod Minecraft Bedrock.