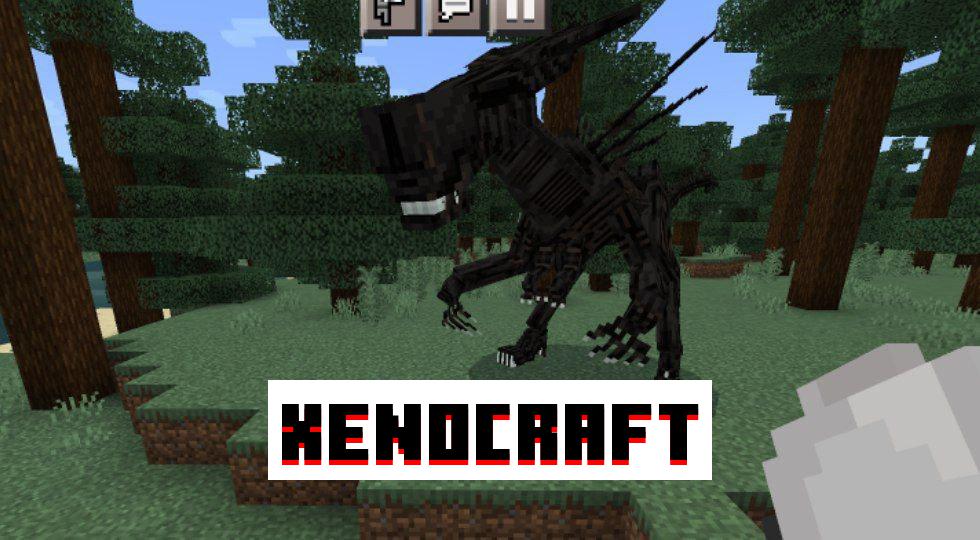 The basis for the creation of the Xenocraft Mod was the 1979 film, which became a cult thanks to its main villain. They are an incomprehensible and very creepy creature from outer space — an alien.

In modern realities, this monster has gained great popularity in the world of Minecraft PE. With the mod, new alien monsters will appear that will hunt for living creatures to destroy them.

The author of the Xenocraft Mod has implemented 6 types of monsters in Minecraft PE at once. A runner is a very fast individual. It is almost impossible to escape from it.

Also, newborn xenomorphs will appear in the game – with light textures. They are slow, but extremely dangerous. In addition, Steve can meet Warriors – very large individuals, strong and hardy.

Ordinary monsters will be the most “mass model”. The author of the addon took care of the boss – Queen. She will have to fight a serious battle. You also need to be wary of face grabs – small individuals that cling to the face.

Who is a Xenomorph?

The author of the  Mod approached the creation of this mob very seriously: his model consists of 525 elements, of which 366 move. The Minecraft PE Mob will walk around the planet trying to find players.

He is very strong and can kill a player with a couple of punches. Even the armor may not save. It would be best to create several iron golems and stock up on arrows.

NOTE: After death, the mob drops the bones and the Shalker’s box.

The second update of the Xenocraft Mod is only in the test version. But now Minecraft PE users can interact with mobs, destroy their nests and even try to fight with the Queen herself.

There will be significantly more functions in the future. The modification also adds two types of weapons: Havok and Colt 1911.

NOTE: To reload the weapon, place a suitable magazine in the empty slot of the left hand.