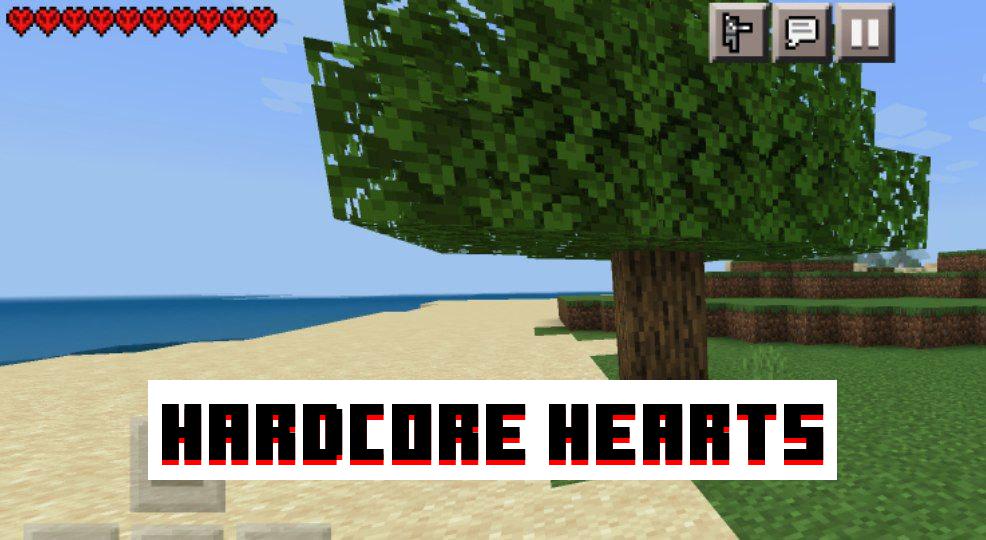 If you are tired of the standard hearts and icons in Minecraft PE on Android, then download Hardcore Hearts Texture Pack that will make them much more enjoyable.

The author has tried to make them as pleasant and informative as possible, which will allow you to more clearly understand how much health and hunger you have left. In addition, with the new pack, the game interface will become much more pleasant and not so boring.

Minecraft PE has a separate mode with increased difficulty. In this mode, the player has one life, i.e. death is the end of the game and the player has to start all over again. Players do not risk playing it, so as not to lose everything they have achieved, although the indicators of this mode look much cooler.

The author offers Hardcore Hearts Texture Pack to users. They will replace the usual indicator of hearts in the game with an indicator of the mode.

NOTE: These pack improves the image of hearts in survival mode and also adds effects to armor icons.

The official textures  have been replaced with hearts from Hardcore Hearts Texture Pack.

The textures of the armor icons have been changed. Now half-filled and unfilled armor icons will show the effect of “broken” armor.

Hearts that have been taken away from the player’s life will have a sad effect.

The textures that are displayed in the player’s interface after receiving the effect of golden apples has also been improved.

Added a unique effect when a Minecraft PE player has been poisoned: a sad expression.

A strange expression of the heart will be if the player gets a desiccation effect.

Open the world settings in the main menu of Minecraft PE;

In the imported files, find the one you need and activate it by pressing the button;

Restart the Game and enjoy the Hardcore Hearts Texture Pack.